Recycling of Bioplastics from Packaging With The CreaSolv® Process

4 Fraunhofer Institutes cooperated in the research project “SustRecPLA” that targeted the recovery of clean and high-quality PLA recyclates from post-consumer waste.

The paper describes the most important findings of the research project. 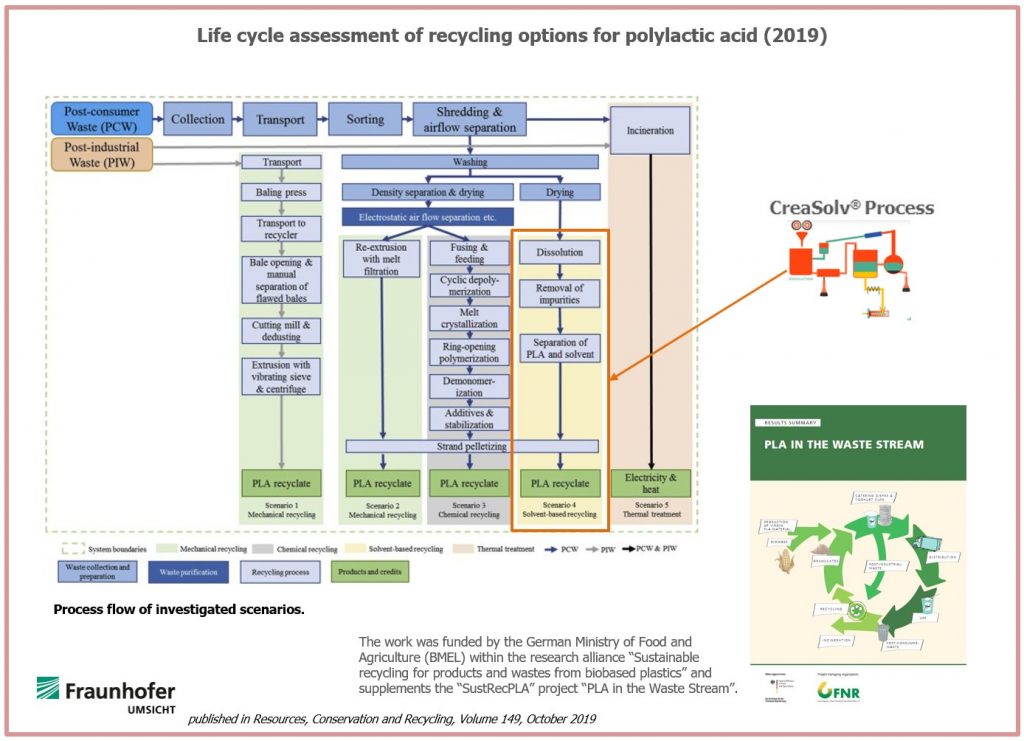 The amount and diversity of products made from bio-based plastics is continuously increasing, especially in the packaging segment. Actually, polylactic acid (PLA) is the most used bio-based polymer on the packaging market and considered as one of the most important one in waste management. 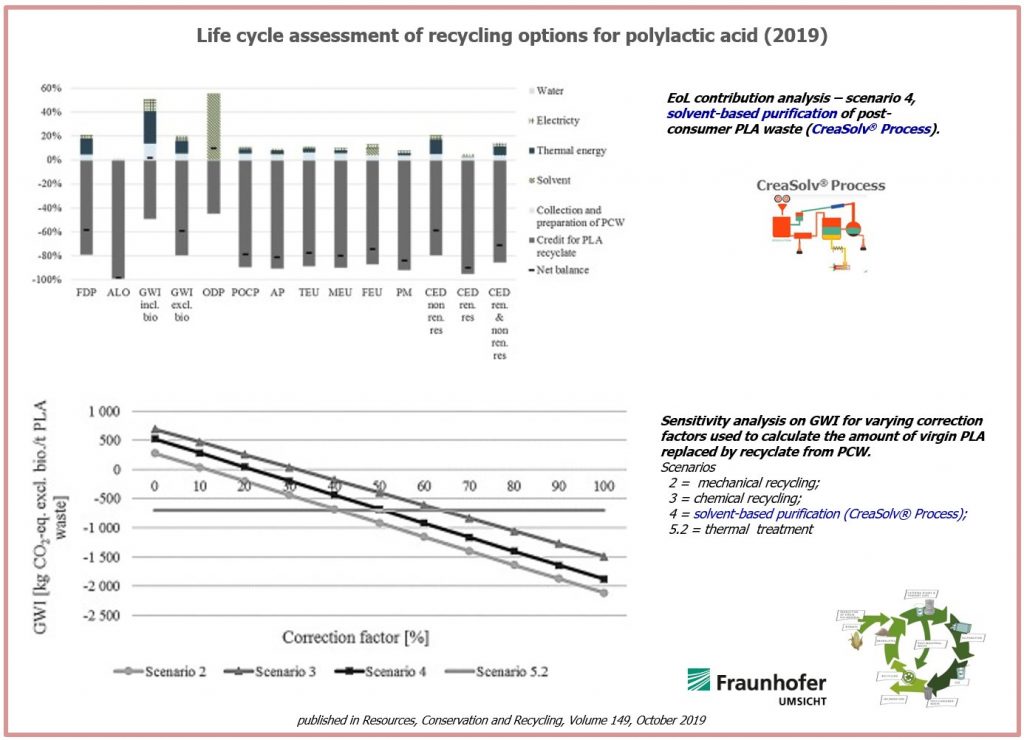 Many concepts, however, use PLA as composite material or in blends, and are hampering or even avoiding the recycling of PLA-containing waste streams with conventional processes like mechanical recycling. In addition, collection and sorting of PLA and PLA-containing materials is a challenge because even the most modern sorting facilities do not consider PLA as an individual sorting fraction – it accounts for a too small proportion of recent waste streams. Thus, currently, PLA from post-consumer packaging waste is not forwarded to plastic recycling companies and disposed or incinerated instead. Especially in single-use applications the positive effect of using a renewable polymer does not come into play.

In order to improve this, 4 Fraunhofer Institutes cooperated in theresearch project “SustRecPLA” that targeted the recovery of clean and high-quality PLA recyclates from post-consumer waste.The project was funded by the German Agency for Renewable Resources (FNR) and the German Federal Ministry of Food and Agriculture (BMEL) and is currently followed up by the Fraunhofer-Cluster of Excellence for Circular Plastics Economy (CCPE).

InSustRecPLA Fraunhofer and partners comparedthe physical solvent-based CreaSolv® Process,that was optimized for selected PLA waste streams, with mechanical (re-extrusion) and chemical recycling (feedstock recovery)with regard to the quality of recyclates and economic viability. Mechanical and solvent-based recycling are based on physical processes, whereby the polymer structure is retained and the polymeric material can be reused. Both processes are therefore classified as Material Recycling (synonym: Physical Recycling). While mechanical recycling requires mono-polymer streams, the CreaSolv® Process can also handle composites (e.g. multilayer packaging) and remove trapped additives and toxic contaminants.

Based on their comprehensive work the project partners were able to demonstrate that there exist different options for PLA recycling. The findings provide a good basis for the inclusion of PLA waste into established recycling streams.

Recycling of PLA waste is compared to thermal treatment since a comparison of the different recycling options is not possible due to different qualities of the waste streams and of the products. Environmental benefits are achieved by replacing virgin PLA with PLA recyclates.

In this study, the complete path of PLA waste was considered starting from its waste source, covering also its collection, sorting and transportation to its recycling or energetic recovery.
Mechanical recycling was investigated for post-industrial and post-consumer PLA waste.
Solvent-based purification (CreaSolv® Process) and chemical recycling were investigated for PLA from post-consumer waste (PCW) only.

The CreaSolv® Process is especially suitable to produce PLA-recyclates from contaminated PLA waste.
In case of solvent-based recycling (scenario 4), 521 kg CO2-eq./FU are emitted. 50% of those green-house-gas (GHG) emissions are associated with the separation and drying of PLA. About 30% result

from primary treatment, preceding collection and sorting of PCW. The remaining 20% arise from the extrusion process. However, through substitution of virgin PLA, a credit of 2040 kg CO2-eq. is calculated, leading to potentially saved GHG emissions of 1519 kg CO2-eq./FU.

The CreaSolv® Process is a Solvent-based Purification (synonym: Dissolution Recycling) and was developed by CreaCycle GmbH and its cooperation partner Fraunhofer Institutefor Process Engineering and Packaging (IVV). Proprietary CreaSolv® Formulations with the lowest risk potential possible for users and environment (ideally not to be classified according to GHS criteria) dissolve selectively the target polymer in order to separate it, so that it can be reused.

The dissolution of plastic is a physical process, because the substance/material only changes its physical state from solid to liquid, and this can also be reversed again. It works like a washing machine on a molecular level and the polymer chain remains intact.

He studied chemistry in Berlin, Germany and joined DuPont de Nemours in 1981. In his carrier he held different roles in marketing in Luxembourg, Switzerland and Germany in the Mylar Polyester film and the Nylon business. In 1989 he moved from the PET business to Polyamides and started from scratch to build the Nylon Specialty Intermediates business in Europe by turning chemical by-products (waste) from Nylon Intermediates plants into new valuable chemicals and developed new markets for them. He grew and run this business until 2004 as Director Specialty Intermediates. In 2003 DuPont merged its Petrochemicals department with its Textiles & Interiors department and gave it the new name INVISTA. In 2004 Koch Industries acquired INVISTA and combined it with their KOSA subsidiary (Polyester business) to form the largest integrated fibers company. Dr. Altnau moved with the INVISTA business in his director role, was executive for Invista Germany and 2 plants in The Netherlands and led the company’s REACH engagement in several consortia.

In 2001 he founded with partners the CreaCycle GmbH located in Grevenbroich (Germany). Together with their cooperation partner Fraunhofer Institute for Process Engineering and Packaging (IVV) in Freising (Germany) CreaCycle developed the CreaSolv® Process for plastic waste recycling, based on solvent-based purification (dissolution).

In 2005 Dr. Altnau founded with producers of alternative safer paint strippers the European Association for Safer Coating Removal (EASCR) in order to lobby against Dichloromethane (DCM) paint-stripper producers in the EU Commission aiming at stopping the increasing number of fatalities of decorators when using DCM strippers. In 2012 the use of DCM strippers was banned in the EU (European Union).

Dr. Altnau retired from INVISTA in 2014 and since 2017 he is Managing Director of CreaCycle.

Tanja Fell is Group Leader “Packaging Recycling” in the department “Process Engineering of Polymer Recycling” at Fraunhofer Institute IVV in Freising, Germany. She holds a M.Sc. in Food Processing and joined Fraunhofer IVV in 2011 as a scientist and project manager. Her research focusses on recycling of post-industrial and post-consumer packaging including bioplastics. Besides solvent-based purification technologies she investigates delamination, deinking and deodorization processes.

Mushroom Packaging? With Increasing Concern Over The Use of Plastic And Its Negative Consequences, A Completely Natural Packaging Material May Be An Innovative Replacement.

With Tether Tube, Alpla Is One Step Ahead

How Mineral Oil Based Inks Contradict The Concept of Food Safety’