The Indian bioplastics industry is again growing rapidly after digesting setbacks of the covid pandemic and the October 2, 2019 SUP (single-use plastic) ban fiasco. The growth of the industry depends on many parameters like government policy, the effectiveness of rules implementation, cost competitiveness,public awareness, etc.

The government of India had announced that from October 2, 2019, all SUP items will be banned all over India. Afterwards, due to massive oppose from plastic industries, the ban could not be implemented. Later on, the government released the guidelines to implement the SUP ban in a staggered manner starting from October 2021 and gave the plastic industry enough time to be prepared. Meantime, the bioplastics industry was struggling due to unclear government guidelines and the ineffectiveness of rules implementation. Moreover, the covid pandemic has also affected the industry largely.

As per current government guidelines, polythene bags of less than 75 microns have been banned from September 30, 2021. Moreover, from July 1, 2022, manufacture, import, stocking, distribution, sale and use of single-use plastic including, earbuds with plastic sticks, plastic sticks for balloons, plastic flags, candy sticks, ice-cream sticks, polystyrene [thermo-col] for decoration, plates, cups, glasses, cutlery such as forks, spoons, knives, straw, trays, wrapping or packing films around sweet boxes, invitation cards, and cigarette packets, plastic or PVC banners less than 100 micron and stirrers are prohibited. From December 31, 2022, polythene bags of less than 120 microns will be banned.

Twophases of the guideline starting from September 30, 2021, is currently effective countrywide. But, proper implementation is not being carried out in many states. Few states in India have made it strict and started using eco-friendly and compostable alternatives.

After the first announcement of the SUP ban on October 2, 2019, the bioplastic industry had seen remarkable growth and many new manufacturers came into the field. Soon after witnessing the fiasco of the same, the industry got stuck and started looking for a way to sustain the business. Afterwards, the covid pandemic gave strong disturbance. Some industries could not sustain themselves and closed during this period of time.

From September 2021, the industry is witnessing significant growth and positivity in the market due to strict bans in some states of India. In addition, the export market is also being developed. New players are also coming into the field of biopolymer compounding, compostable product manufacturing and trading. Almost 162 companies have registered so far on the government portal to sell/manufacture/trade compostable items in India.

Numerous processors are producing many compostable products in India. But, the main issue is with raw material availability. The main raw materials are PLA, PBAT, Bio-PBS, PHA, etc. These materials are being imported to India and have limited manufacturing capacities worldwide. Moreover, when demand comes, short supply is there. This is the main reason behind the slow growth of the industry. Until enough raw material supply is available in India, product manufacturers can’t ignore the fear of keeping their production idle because of raw material unavailability. Few companies have shown interest to start manufacturing PLA and PBAT in India, which will lead to the massive growth of the industry in India and will also lead to lower cost and easy availability of the bioplastic raw materials. 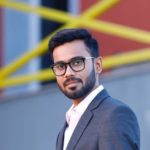 Divyesh Dadhania, a Polymer Technologist by Training is the Founder of Biopolymer Project at KP Tech( Machine) India Pvt. Ltd.

Presently, working on a biodegradable polymer project to establish an industrial-scale production of bioplastic. My pursuit began with my undergraduate education. The negative impact of synthetic plastic products on the environment caught my attention which further motivated me to pursue a master’s in polymer technology. While doing masters, working on sustainable polymer became the dream and quest to fulfil the dream led me to work innovatively and independently in a research laboratory at Ahmedabad, India. The team’s hard work brought me one step closer to my mission which I envisioned years back. The research was carried out at IIT Guwahati to develop lab-scale technology. Currently, we are scaling it up to a pilot plant.

Beverage Packaging in India: Path to a Circular Economy