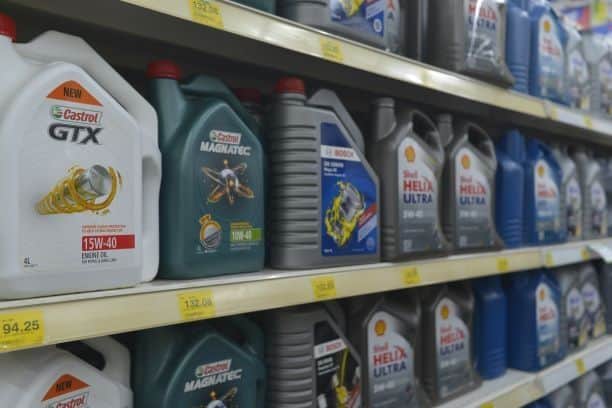 All material surfaces, no matter how smooth they are, show many irregularities in the form of peaks and valleys, which are large when considered on a molecular scale. When these two solid surfaces are pressed over or slide over each other, a real contact between these surfaces occurs that will cause friction and consequently the production of heat. During the motion of the sliding surfaces, a considerable amount of frictional heat is evolved at the rubbing surface. This results in high local temperature even under relatively light loads and speeds. This friction also causes a lot of wear and tear of the surfaces of the moving parts.
Lubrication reduces friction between the moving surfaces or rolling pairs. The lubricant also acts as a coolant carrying heat away from the sliding surfaces, so proper lubrication of all the moving parts is an important function in machinery or engine operation.
A good lubricant possesses the following characteristics:

One of the single largest applications for lubricants, in the form of motor oil, is protecting the internal combustion engines in motor vehicles and powered equipment. Typically lubricants contain 90% base oil (most often petroleum fractions, called mineral oils) and less than 10% additives.

In 2018, Global oil consumption grew by 4,990,000 barrels per day.  Automotive applications dominate, but other industrial, marine, and metal working applications are also big consumers of lubricants. Although air and other gas-based lubricants are known (e.g., in fluid bearings), liquid and solid lubricants dominate the market, especially the former.

There are basically two main types of lubricants: petroleum-based/Oil Based and Synthetic. Each of these is suited for particular purposes and conditions. The different types are also subject to varying levels of oxidation and degradation, and are compatible with only certain types of machinery components, demands, and environments.

Everyone who owns an automobile knows that the engine oil has to be changed regularly to provide longer engine life. The motor oil in an automobile’s engine is commonly a petroleum-based lubricant. Though it contains the same hydrocarbon base as the gasoline used to power the automobile, the formulations are quite different. The hydrocarbon- or petroleum-based lubricating motor oil is designed to protect the various moving parts of the engine, while gasoline, which is also a petroleum product, is formulated to produce the explosive heat needed to power the engine.

• Precisely engineered chemical reactions created by specifically applying heat and pressure.
• Used instead of Petroleum/Oil based for better efficiency.

• Applications under extreme conditions.
• Pastes can be used at temperatures above 300°C
• Greases can be applied in dry, dusty, wet, corrosive environments and at broad ranges of temperatures, speed and load.

According to the report of Wipro InfoTech, 2017, India, one of the fastest growing automotive markets in the world is also emerging as a global sourcing hub for the automotive industry. The Indian automotive industry is sitting pretty, and poised to gain tremendously from the dramatic changes that are sweeping the globe. In a rapidly changing industry, it is important to keep an eye on key metrics, to reliably foresee the future.

Demand for automobiles has risen at healthy rates across segments during the last decade, which is reflected in the segmental trend in sales. In April-March 2019, overall automobile exports grew by 14.50 percent. While Passenger Vehicles exports declined by (-) 9.64 percent, Commercial Vehicles, Three Wheelers and Two Wheelers registered a growth of 3.17 percent, 49.00 percent and 16.55 percent respectively in April-March 2019 over the same period last year.Looking at the above chart, one can understand the need of lubricants as per the population of the country and the demand for automotive respectively. For India, it is observed that the demand for automotive is 10 vehicles per 1000 people, so an estimated 20 million vehicles are required to suffice the entire population of India (approx. 2bn population)

For India, it can be seen that there are 22 vehicles per 1000 people. Now considering this on the total population, the numbers convert to:

Since motor oil has to be changed regularly for better engine efficiency, let’s assume it is changed twice in a year so the direct sales of lubricants visible through motor vehicles rounds up to around 88 million units.

Applying the same formula for  2-wheelers:

Indian market can be observed to be growing rapidly and consumption for automotive and automotive products to be ever increasing. Consumption has nearly quadrupled since 2003 till present and ever increasing demand makes way for automobile/lubricants to place their firm hold in their Indian sector and by increasing their volume.In the Commercial Vehicle (CV) segment, thrust on product development by domestic players and entry of foreign players have resulted in the introduction of advanced products into the market. While this is fuelling further market competition, it is also leading to a structural shift, with demand increasing for higher tonnage trucks, indicating towards a maturing product mix.

With the curiosity to understand the lubricant market in further in depth, the research was extended by visiting a local oil vendor in the suburbs of Mumbai. This retail outlet selling oils from various brands revealed some valuable information towards the study.

The outcomes of the research were as follows:
Sales: Approx. 250 to 300 litres of oil/month
The vendor achieved a sale of about 250 to 300 litres of oil every month considering the peak and off-peak periods for the passenger automotive lubricant segment.
Now, let’s consider the least minimum sales that this vendor can make i.e 250litres/month.
250 x 1month= 250litres.
250 x 12months= 3000litres.

This is a yearly estimate of sales of lubricant for passenger automotive segment per vendor.
Assuming, there are about 1000 such big and small vendors across the Mumbai region we get:
3000litres x 1000 vendors= 3,000,000litres/year only in Mumbai.

We can understand the potential that the industry holds just by looking at the demand in a small portion of the big ocean. Given that there are more than 120,000 vendors across India, the estimated demand for the lubricants exceed far more than the country is able to produce in itself. Such a vast industry requires vast amount of containers to store, transport and use the product across different applications.

Across the world, lubricant oil is primarily used for cooling automobile engine, marine engine and for industrial purposes.  Global demand for lubricants in the world is estimated at around 41 million (mn) KL. The global lubricant market was worth USD 44.0 billion in 2011 and is expected to grow at a CAGR of 5.5% from 2016 to 2021.

Globally, the lubricants industry has been growing at 2.0-2.5% per annum in the past five years. The Indian lubricant market is expected to register a CAGR of 4.64%, during the forecast period, 2019-2024.In developed countries, automotive lubricants have been growing at a slower rate of 1.0% per annum on account of the saturation of vehicle population, improved engine technology and better quality of oil.

The region wise distribution of lubricant consumption worldwide is shown below:

Asia is the third largest market for lubricants in the world and is expected in future to grow at a faster rate as compared to other developed markets. Asia-Pacific dominated the global lubricant market in terms of consumption, owing to strong demand from China and India.The per capita consumption of lubricants in different countries is shown above.

India is the third largest lubricant market in the world, with the number of cars increasing exponentially across the nation, the annual lubricant consumption has also grown and was estimated to be around 260 million liters in 2018 as against an installed capacity of 1.6 million KL and has grown at a CAGR of around 7.0% over the period.

In 2013, Maxol Lubricants, part of The Maxol Group, unveiled a new motor oil range reflecting new labels and symbols that make choosing the correct motor oil easier. The label displays a list of vehicles for which use of the oil is recommended.
• The new packaging is designed to reassure customers that they can purchase Maxol motor oils with confidence at the forecourt.
• The primary focus is to make the purchasing process easier for consumers understanding that the non-technical language, new symbols and clever design achieve this.

Dr.R.Rangaprasad is a polymer & packaging professional with over 25 years experience. He has served as Consultant at Indian Institute of Packaging Mumbai & as Director at SIES School of Packaging / Packaging Technology Centre. Between 1995 & 2007, He was associated with Product Application & Research Center of Reliance Industries Limited (RIL). He has also conducted training & knowledge workshops at leading FMCG companies in the area of design of polyolefin materials for packaging sector.

How do liquid pouch filling and sealing machines work?

Let’s get Smart about Packaging