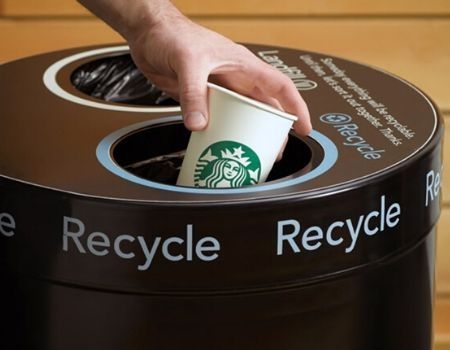 Coffee giant Starbucks has started to trial a new recyclable and compostable cup in some of its stores in New York, San Francisco, Seattle, London and Vancouver.

Traditionally, Starbucks uses plastic to line its paper cups. Plastic lining within the paper cups makes it difficult to recycle in conventional recycling centres, and most cups end up in landfill. However, in this new move, the coffee chain will be using a compostable material called BioPBS to line its cups. The new lining also prevents drinks from leaking, Starbucks claims.

The trials, which started on 9 March, have been conducted in cities that have access to industrial composters in order for these cups to be recycled properly.

In a statement, Starbucks (@Starbucks) said: “The tests are designed to provide key insights and learnings into the partner (employee) and customer in-store experience with the goal of no noticeable differences in performance between the new cup and current cup.”

The new cup was developed as part of the company’s NextGen Cup Challenge, which aims to cut down single-use packaging waste by developing an industry-wide recyclable and compostable to-go cup solution.

The challenge began with a six-month design competition that saw hundreds of ideas from industry experts, before 12 were selected for further testing and then cut down to the final cup for in-market testing.

The cups being rolled out in New York, San Francisco, Seattle, London and Vancouver are certified compostable and recyclable.

In 2018, Starbucks made plans to ramp up its sustainability targets. The introduction of a compostable cup companywide by 2022 was part of these plans.

The move by Starbucks comes at a time when there are rising health concerns over COVID-19. Earlier this month, the coffee chain announced that it had temporarily banned the use of reusable personal cups in its stores across the world due to safety concerns in relation to the coronavirus outbreak.

Commenting on the coronavirus situation last week, an EMEA Starbucks spokeswoman told Bio Market Insights: “We are actively monitoring the situation and taking precautionary measures to ensure the ongoing wellbeing of our partners (employees) and customers. Out of an abundance of caution, we are pausing the use of personal cups or tumblers in our stores across the UK.”

In 2010, Starbucks launched a campaign promoting the use of personal cups/tumblers to reduce its paper waste output. According to the coffee chain, “in 2011 customers brought their own tumblers into our stores more than 34 million times, saving more than 1.5 million pounds of paper from landfills”.

In the UK, in 2018, Starbucks approached environmental charity Hububb about trialling a 5p charge on any hot drink bought in a disposable cup. After approaching the charity, Starbucks introduced this charge across the whole of the UK in order to boost the use of reusable cups and prevent waste. The funds raised from this charge goes to Hubbub to help it to promote environmental campaigns that tackle plastic pollution. However, due to the coronavirus, the 5p charge has been suspended.

Last week, Hububb (@hubbubUK) CEO and founder Trewin Restorick told Bio Market Insights: “It is totally understandable what Starbucks has chosen to do. The main aim is to look after the welfare of its employees.

“Every business is responding in different ways to the virus. Starbucks has chosen to temporarily suspended the use of reusable personal cups in its stores.

“In the long term, we hope that more reusable containers are used. This is the right thing to happen.”

Emma Priestland, Corporate Campaign Coordinator at Break Free From Plastic (@brkfreeplastic), said: “All measures to protect against COVID-19 should be based on clear scientific evidence of efficacy.

“We hope this is the basis of the move by Starbucks away from reusable cups, and we would welcome transparency on their decision-making process. It’s also very important that this action is time limited and, once the virus risk has passed, they return to encouraging reusables and reducing plastic.”