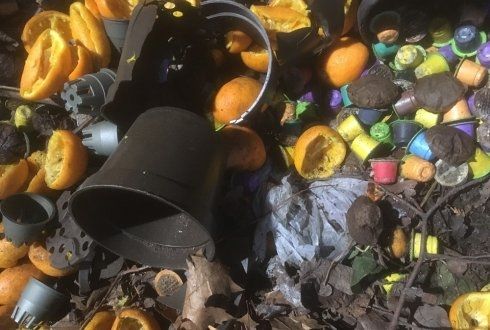 In a representative full scale practical test at one of the facilities processing GFT in the Netherlands, compostable versions of a series of plastic products were followed during the regular GFT treatment process. Nine products from different suppliers were investigated, including biowaste collection bags, plant pots, tea bags, coffee pads, coffee capsules and fruit labels. To obtain useful compost, the waste treatment process involves a sieving step, in this case after a composting cycle of 11 days, in which the remains of not fully disintegrated biowaste, together with contaminants like metals, glass, stones and plastics are separated. Besides the final compost, also the sieved fractions were analysed regarding the presence of (conventional and compostable) plastics.

Based on all observations in this study the researchers conclude that compostable products which comply with the requirements in European standard EN 13432 disintegrate fast enough in Dutch GFT waste treatment systems. Nevertheless, the presence of conventional (non-compostable) plastics in GFT is a real problem for the Dutch biowaste treatment sector and needs to be solved.